By Adria Rothfeld on April 20, 2015 in Nutritional Health News and Research 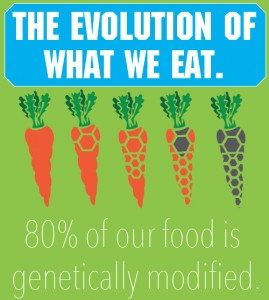 The term GMO (genetically modified organism) is everywhere. Our government says they are safe, good for the economy, yet 60 countries around the world, including Australia, Japan, and all of the countries in the European Union, have severe restrictions or outright bans on the production and sale of GMOs.

GMO’s are designed to allow chemical manufacturers, such as Monsanto, to spray pesticides (such as Roundup) directly on their crops without killing them. They say they are safe, yet much of the independent research has proven otherwise. In the U.S., the government has approved GMOs based on studies conducted by the same corporations that created them and profit from their sale.

Here’s what we aren’t being told: Pesticides, including glyophosphate, are always mixed with adjuvants, each with a unique level of toxicity. Based on numerous studies it was noted that commercial formulations of glyphosate exhibit higher toxicity than that of the active substance itself.

Glyophosphate: Is this something you want blasted on your food? Contaminating our water?

According to the World Health Organization glyophosphate is “probably carcinogenic to humans.”

Most glyphosate-based herbicides are not approved for use in the aquatic environment; however, measurable quantities of the active ingredient and surfactants are detected there. The toxicity of glyphosate to amphibians with increased sensitivity compared with other vertebrates.

When fish are exposed to this pesticide, they develop digestive problems very similar to Celiac, whose incidence in humans has quadrupled since the 1950’s.

GMOs are also being linked to antibiotic resistance.

One of the supposed benefits of GMOs is that they should result in less herbicide spraying, since some plants have been modified to be herbicide resistant. However, this has instead lead to the emergence of “super weeds” that are more resistant to herbicides, requiring increased spraying, according to a University of Washington Research Study.

No Backsies: The long-term impacts of GMOs are unknown, and once released into the environment these novel organisms cannot be recalled.

What foods are GM?

Products derived from the above, including oils from all four, soy protein, soy lecithin, cornstarch, corn syrup and high fructose corn syrup among others.  Also:

Non-food items that may contain GM ingredients include cosmetics, soaps, detergents, shampoo and bubble bath. Pharmaceutical companies use Aspartame in some laxatives, supplements and children’s vitamins.

Organic products do NOT contain GMOs. ” Additionally, organizations, like the  Non-GMO Project, list products verified to be GMO-free. You can also download the Non-GMO Shopping Guide app.

Some companies are moving away from GMOs. Fast-food chain Chipotle has committed to removing GMOs. Also, Whole Foods Market said by 2018 it will label all GMOs at its U.S. and Canadian stores.